What is the Wonderlic Test?

The Wonderlic Test, also known as the Wonderlic Personnel Test, is a popular psychometric test. Companies, schools and universities, and even sports organizations use this assessment tool. The Wonderlic test measures the aptitude and problem-solving skills of the test-taker.

This test assesses your problem-solving abilities and your capacity to perform when the clock is ticking. The Wonderlic Personnel Test (WPT-R) features 50 questions and comes with a time limit of 12 minutes. The test comprises four categories: General Knowledge, Verbal Reasoning, Abstract Reasoning, and Numerical Reasoning.

Pass the Free Wonderlic Practice Test and Assess your Level

Note: The test consists of 50 questions. You will be given 12 minutes.

You have already completed the quiz before. Hence you can not start it again.

You must first complete the following:

Quiz complete. Results are being recorded.

In essence, the Wonderlic Test is a form of an IQ test that aims to measure the test taker’s general cognitive ability. The subjects included on this test are math, vocabulary, and reasoning.

Although the questions themselves are not particularly difficult and can be answered if given enough thought and consideration, what makes it challenging is the mere 12-minute time limit that every test taker is given to answer all these questions in a single sitting.

To make things worse, some of the questions in the test are intentionally formulated ‘time traps’ so that the candidate loses precious time by focusing on that particular question. The candidate is thus prevented from going over easier questions that could be solved at a much faster pace.

This time factor is one of the reasons why people find the Wonderlic challenging despite containing a number of ‘easy’ questions.

What are the Main Types or Versions of the Wonderlic Test?

This is a self-administered Pretest that helps employers see if you are qualified before they invite you to an on-site interview. Companies use this test to see if you have the skills and capabilities needed to succeed in the job you applied for. This short version of the Wonderlic Contemporary Cognitive Ability test is intended to be completed unsupervised over the internet. This assessment features 30 questions and lasts 8 minutes.

This test measures your general mental ability. It also assesses your ability to understand instructions, solve problems, adapt, learn, and deal with the demands of the job role. This assessment is made up of 50 multiple choice questions and candidates have 12 minutes to complete as many questions as they can.

There are actually three different Wonderlic Personality tests. They are as follows:

The Comprehensive Personality Profile is made up of 88 true or false questions and is generally completed in 20 minutes. This test is created primarily for employees who deal with customers, for example, those in sales, nursing, customer service, healthcare, or telemarketing. These individuals typically need strong interpersonal skills. The results of this assessment will be used to assign candidates into one of four categories: supporter, driver, thinker, or motivator.

This Personality test comprises 90 questions and is generally completed in 20-30 minutes. The WPI is designed to be used when screening for entry-level positions. Employers use the WPI to assess candidates that will be dealing with merchandise, company equipment, and cash without personal supervision. The test is based on the five-factor model (seen above) but focuses on three attributes: stability, conscientiousness, and agreeableness.

Previously known as the “Hay Aptitude Test Battery”, this Wonderlic Assessment is normally used in the first stages of the hiring process for jobs including data entry, accounting, bookkeeping, and tellers.

The Wonderlic Scholastic Level Exam (SLE) is a quick test of quantitative and general verbal skills. It is like an I.Q. test. The Wonderlic SLE is typically used to help see who is best suited to training and college programs. The two versions of the Wonderlic SLE are: the full version and the Quicktest version (or Wonderlic SLE Pretest).

The full version of the test features 50 multiple-choice questions and has a time limit of 12 minutes. The exam is administered online, however, you may need to take the test at an assessment center under supervision.

The Quicktest has the same content, however, it only features 30 questions and has a time frame of 8 minutes. Schools generally rely on the Quicktest as part of their screening process. Both the full version and Quick test cover four subjects: logic, mathematics, verbal comprehension and general knowledge.

To enter most nursing programs in the U.S.A. you need to complete either the Wonderlic SLE Exam or the Wonderlic Basic Skills Test. You may also need to take the Wonderlic SLE as if you wish to become a medical professional, for example, a dentist, general physician, occupational or physical therapist.

The WBST is used to see which students and job applicants have solid fundamental numerical and written skills. This test features 50 English and 45 maths questions. You are given about 20 seconds per question, and also, you are not permitted to use a calculator, which makes this exam all the more difficult.

This test is commonly used by colleges and businesses throughout America. In essence, the Wonderlic Basic Skills Test assesses how effectively you have picked up life skills and general knowledge. You will be asked, for example, to analyze concise tests, calculate percentages, and analyze simple graphs. You will need to show that you can interpret information from a written passage, manipulate numbers, and logically and clearly convey your thoughts in written form.

How to Prepare For the Wonderlic Test

Despite what you may assume, you don’t have to be especially gifted to score highly on the Wonderlic exam. Rather, these tests measure your ability to master a specific set of exercises, and we can teach you exactly how to do this. In fact, we can show you how you can improve your Wonderlic score, quite simply. So know that before you even begin the Wonderlic Personnel test, tailored preparation will help you increase your score and improve your chances of landing the job you want.

Just like all other standardized tests, you will need to prepare and practice. Instead of randomly reviewing verbal literacy and numerical reasoning topics, you should begin with our tailored free Wonderlic practice test.

Practice tests are essential when practicing for a standardized exam – there is no real substitute. Completing Wonderlic style questions under pressure will help you become familiar with the format of the test and also teach you how to pace yourself.

It is also highly recommended to take a Wonderlic study course from a trusted and proven course provider. You will only have one shot at this test and don’t have any time to spare. Don’t risk attempting to piece together your Wonderlic practice from different Internet sources. Rather, take an online Wonderlic study course that has coached hundreds of triumphant students, like the Rapid Wonderlic Mastery Course from Wonderlic Test Prep.

What is a Good Wonderlic Test Score?

According to Wonderlic, Inc., however, it claims that a person that has a Wonderlic score of 10 suggests that they are at least literate.

Furthermore, some employers or organizations will instead utilize a shorter version of the Wonderlic test, known as the Wonderlic Personnel Quick Test (WPT-Q), where the candidate only has to answer 30 questions but with an 8-minute time limit.

Whether you pass or fail on the Wonderlic exam depends on the company or school administering the test and the scores of your competitors.

Many employers and schools set a minimum acceptable score, but as stated above, that score varies by company, the type of job, and other factors.

While the general average score across all industries hovers around the score of 20-25, this isn’t set in stone as companies may increase or decrease the threshold for applicants depending on how urgent it is for them to fill the position or how many positions are available at the time.

Suffice to say, if a company wants to take as many applicants as possible, it will lower the mark so that it ends up with the appropriate number. On the other hand, a company that only has a few positions will only consider people who score highly.

According to the Wonderlic group, the following are the average scores for the different profession:

As stated at the beginning of this page, the NFL also utilizes the Wonderlic test and so we have provided the general average of each NFL player position: 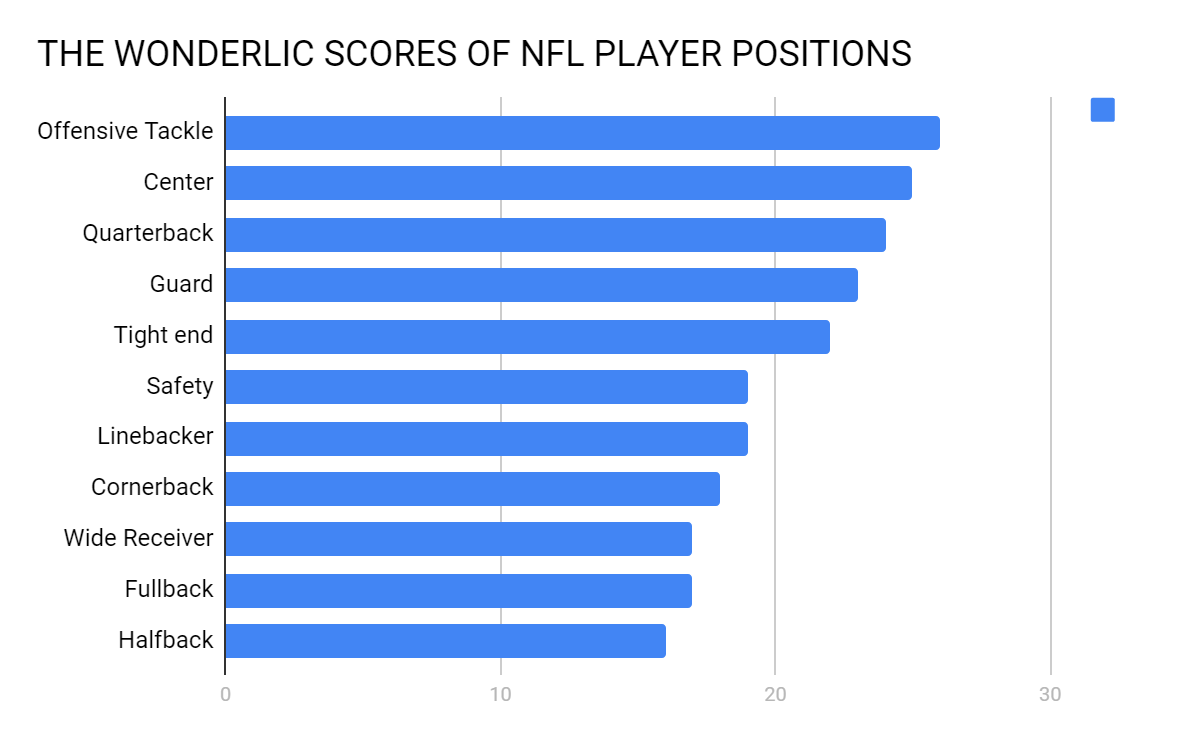 Additionally, if you are interested, you may also want to find out the Wonderlic percentiles which can help you understand how you rank in human intelligence when compared to other groups in a population.

If your percentile rank is 98 or above, you qualify for Mensa membership. This is a high IQ society and a person who has been accepted in it can make contributions to the intellectual world.

Which Companies Use the Wonderlic Personnel Test

Although the Wonderlic was first created in order to assist companies in improving its employee selection process, through the years it has been developed and modified to fit the needs of the United States Armed Forces and the National Football League (NFL).

Not long after, even the United States Navy also began to use its version of the Wonderlic Personnel Test to select candidates for its pilot and navigation training.

Versions specific for college entrance exams, nursing positions, and other industries soon followed after and the questions have been modified and updated to keep up with the change of the times.

Other businesses that use Wonderlic Tests are, for example, PepsiCo, Mercedes Benz, EMCO, and Medline Industries.